I grew up on the water.

Not the ocean, but the big, blue lakes of northern Ontario, accompanied by beavers, leeches and all sorts of other creatures.

Floating on the water in a boat is knit into my being. I think my parents told me that my first canoe trip was when I was two – which feels a bit late considering their hippy canoe freak status when I was born.

Bruce – my pops, continued on to be a shop teacher, teaching young offenders who couldn’t quite go to prison, but needed to be disciplined, how to build canoes, paddles and little log cabins. What a guy.

When he retired, he continued on building Cedar Strip Canvas Canoes and hand crafted paddles that are essentially functional art – check him out… paddles by bruce.

So, when Rob decided he was going to buy a canoe, I decided to get dad to ship out a paddle in Rob’s honour, and he did without hesitation. Papa Bruce wood burnt in it “Tasmanian Mountain Man.” Clearly, that’s how he observes Rob. 🙂

After getting lost via GPS in Surrey, Rob finally had the old timer on top of the Pathfinder, and the second I got home from work we were out the door to test it.

Despite being five meters from the shore, the incoming storm was producing rather large waves, bigger than I was ever used to, and I suggested that we retreat quickly to the beach. But – in those few moments out in the ocean we formed the start of a bond with that blue canoe. 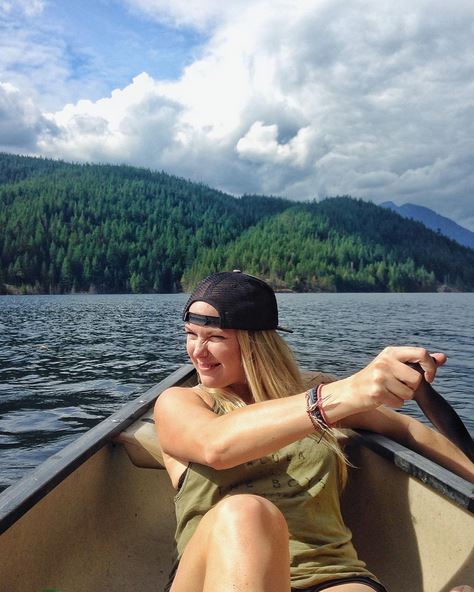 For Rob, it’s a means to finding fish in the lakes, and for me, it’s a link to my roots.

I’ve even taken it out on a few adventures of my own with my lady friends. (YAY, JANET, you’re a paddling BOSS LADY!)

So far, barely one summer in, and it’s fair to say I’ve fallen back in love with the hobby that I was forced into as a little girl by my wilderness loving parents. It’s funny how things circle back around. When I was a kid I used to fight another canoe trip – oh the sleepovers and girl talk I would miss out on… and now 15 years later, I crave the roots my parents embedded into me as a child.

Blue Canoe, you may be old, but you float. So we’re one hundred percent good.