I had so many hopes for our NYE trip to Eflin Lakes.

But there I was, stuck in a snow bank, crying.

(FYI – that’s not me, it’s my friend Steph. But she fell over too, she just didn’t cry. Brave girl.)

Remember how I said I was going to love ski touring? Well, this expereince definitely tested that, and possibly my relationship with my own mind.

After I decided to man up and pretend like I was somewhere else, my zombie-like movements towards the Elfin Cabin felt less and less intense. (That could also be because there’s not nearly as much incline in the second half of the slog, but anyways…)

We fueled up regularily and kept on keeping on, despite the frustation with blisters and pain. I kept telling myself how epic (and quick) the down would be.

And then, there it was. A sea of tents next to the cabin, all braving the cold in the name of a backcountry New Years Eve.

Once we finally set up our zone, sat down in the snow to have a (very) cold beer and watch the sun set, we had to smile. So much work to make it to this incredible place, but we did it. And we were on top of a mountain ridge, in the middle of nowhere saying goodbye to 2015 and hello to the new year.

As we watched the sun go down, friends from another crew that were joining us showed up. We all had a few moments of discussing the burden of the slog up, and then we moved on. We had a year to say goodbye to and new one to launch. Snowball fights, passing around weird forms of alcochol and trying to see the northern lights… those who could brave it til midnight even witnessed fireworks.

(I’m a granny, so clearly I was sound asleep by then…) 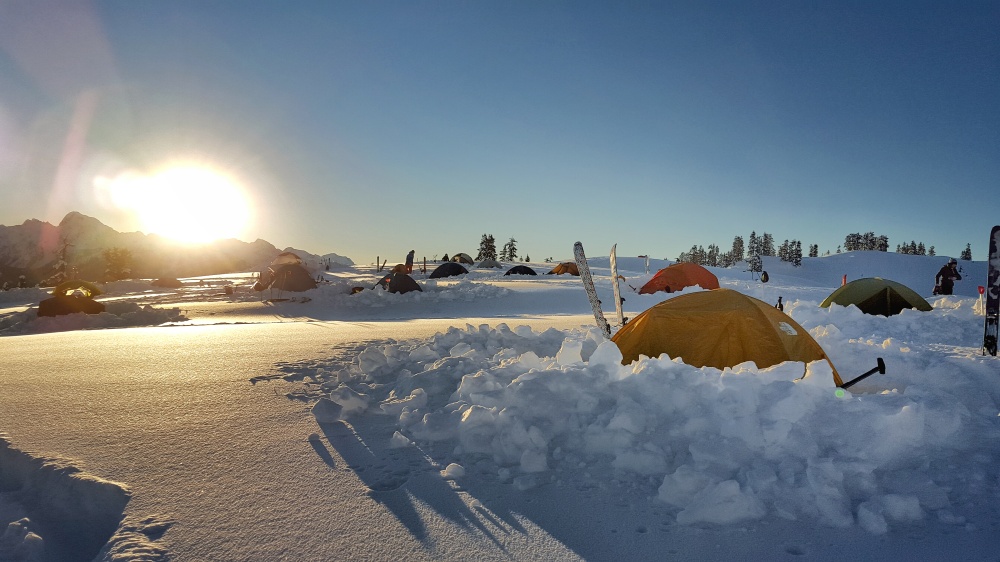 Watching the sunrise when your view is 360 degrees of mountains is unlike quite anything else. From where the sun comes up to where it’s reflecting on the mountains, every angle has beauty. We cooked our breakfast and slid our feet into the cold, blistery boots and made our way down. The girls went seperate from the boys, and the boys put their avalanche training to use with a backcountry lap of fresh powder before heading down.

Though I had my moments of weakness (okay – I was a giant baby), it was a truly memorable way to ring in 2016.

If that was the start, just think – what else could I cry my way through this year?? 😉